Extremely lovely collection, @Hammonds ! The only shirt I have of the bottom set is the Beautiful Thieves shirt. I’m hoping to get all of those anniversary shirts someday, but I’m not holding my breath.

I did do the right thing recently and got the Burials DF shirt on eBay. So glad I did… the Burials era stuff is HARD to come by…

Cheers. You’d think stuff from the last 10 years would be easier to come by as it’s not considered to be their prime era.
The only blot on my anniversary tee collection is the ‘i Hope you suffer shirt’ the webstore fucked my order up (what a surprise). I had to scramble to grab whatever was left. So my whole collection are size ‘M’ except that tee which is ‘XS’

I would say I have a hard time wearing my DF shirts, but it’s more like I do not wear them unless I’m going to a show. All of my AFI shirts, I treat more like sensitive objects… even my Missing Man pieces.

That’s fair. I’ve worn a couple of the anniversary tees once (but only for a couple of hours) but that’s it for them. Everything in the other picture i’ll Wear a bit more freely. The owl df shirt, Crash love shirt, 2003 tour and Nephilim shirt/hoody see the most wear. I’ll wear them pretty regularly and use them as my skate tees. The ‘eyes’ shirt, and the bootleg in the top left are gonna be added to that rotation in time. Everything else I wear, but a lot less, and usually not for long enough to need washing all the time. 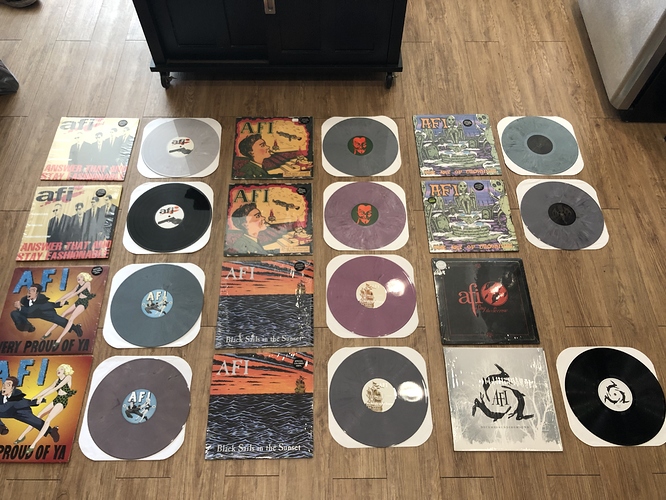 IMG_1968.JPG4032×3024 2.41 MB
Hi everyone! new here, but have been an AFI fan since i first heard the leaving song part II back in 2003 on channel V (Music video channel in aus). Like most of us here, it was love at first listen and i was hooked. AFI were definitely the catalyst for me going through my angsty emo teenage phase. dressed in black, super tight jeans, band shirts and cut and dyed my hair to look like Jade’s. Having a curly afro didnt really work out so well haha. Sing the sorrow will always be my favourite album, but i have a lot of love for the older albums - especially Very Proud Of Ya. it was the first album i ever bought on vinyl and i gave it an absolute flogging. it kick started my love for vinyl. in hindsight, I was lucky this started when i was 14 working at a burger king earning $5.20 an hour and couldn’t afford to splurge. took me a few years to get this collection and i have had a hiatus on buying vinyl, but have recently got back into it. Admittedly i stopped listening to AFI’s music after DU so this was the extent of my collection. I do have a lot of stuff missing (mainly cds and 7 inches) as i left my stuff at my parents when i moved out and i just went back to Australia after 4 years abroad and it was nowhere to be found. Luckily all the 12" were found. I’ve moved from Australia and now live in Sacramento, CA and brought back all my vinyls with me.

I just wanted to get some clarification on the colours. Discogs is great, but i cant 100% tell what colours they precisely are. One of the VPOY looks like a teal but when i go to discogs my version looks a lot darker. Same with the AOD. I can’t tell if the SYMAOYE is mauve either?
I couldn’t find a light grey variant for ATASF either.
I also wanted to know if the ATASF navy blue is a rare variant as none have been sold?

I also have a unworn mint condition pair of AFI vans size 11 in the box still in australia. I couldnt fit them in my luggage. ive tried doing research on this but couldn’t find out how rare they are or how much they worth? any information would be greatly appreciated!

Lastly, I’ve seen AFI twice. in 2006 and in 2010. i was absolutely stoked when they played Love is a many splendored thing in 2010 and finishing with God called in sick today is one of my favourite live music moments ive witnessed!

Discogs is great but put together by other collectors and there isn’t enough info from Nitro to truly establish what colour is what (bar the original releases with precise colour variant info). It’s all down to someone’s interpretation and the sold stats then get extra muddled where people have colours listed incorrectly.
I don’t think the navy AT&SF is especially rare as I’ve had more then one of those before and it was a struggle to sell. The more sort after colours are normally down to individuals preference and generally, the nicer and more vibrant colours. There’s always loads of grey original pressings knocking about.
Someone sold an unused pair of vans in the original box in July for $165.50. The same person that also sold the sealed TAOD skateboard deck for $542.00!! Hope this helps. 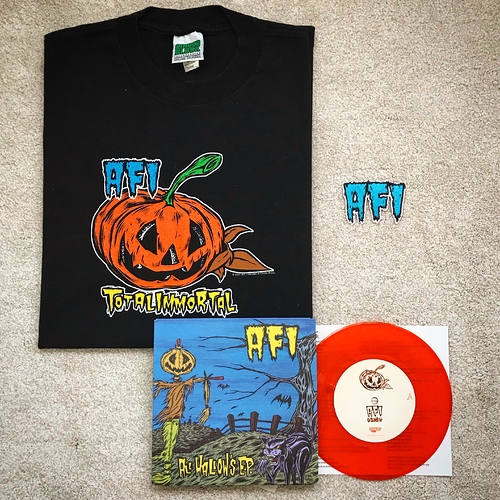 thanks for all the info mate. Appreciate it!

they also have a bunch of other imports on their page
https://www.deepdiscount.com/search?q=afi&mod=AP&tid=99#!?pagenum=1

Jesus. This collection makes my heart race. I hope to one day collect this much AFI. congrats, my friend.

I’m selling my whole collection for a very fair price, check my thread

I would love to see those shoes! They just happen to be my size. I usually wear converse, but AFI could make me wear Gap clothes if they branded them. (I’m still rocking hardcore emo. Makeup and all.)
But yeah, if you’re looking to sell those shoes, I am very interested. Even if you aren’t looking to sell you should show a picture for me, please.
:>Charlie.

I’ve left them in Australia, but I can ask my brother to take some photos. He’ll also be bringing them with him when he comes to visit me in December.
I’m still unsure whether I’m going to sell any of my stuff. I’ve been listening to the vinyls and all the love came flooding back haha. If I decide to sell, I’ll let you know ASAP!

Just a reminder that this thread is for sharing collections, not selling items.

So as some have seen I’ve gone and created a separate Instagram account for all my afi related stuff in on place. @df_si_afi if you want to follow

Shout out to @dnlkdwll for spotting the Drowning flag on eBay! I’d thoroughly recommend it! 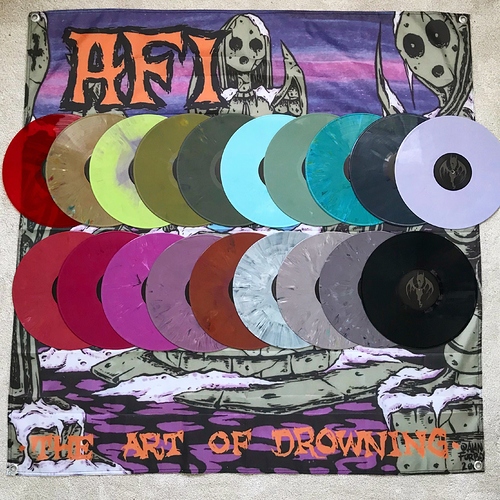 I bought one too. It looks really good with little blurriness. My expectations were pretty low but it was well worth it for the price.

Didn’t even realise that was a thing. And bought.

Incidentally. To find these sort of things on eBay I have to change my location from UK to USA for it to show up, despite them shipping worldwide.