What was the first ever AFI song you heard and when?

I had both “The Boy Who Destroyed the World” and “I’m Destroying the World” on my first mp3 player. In fact, most of the music I had on there came from the Tony Hawk video games. THPS3 was my introduction to AFI as well.

One of my associates at work randomly stopped me yesterday and asked me about AFI. He heard me talk of them before and asked about their music. He asked me if I ever saw them live. Of course I started telling him stories and could probably talk about AFI for hours, but I asked him if he had any of their music and I don’t think he did.

I recommended “Art of Drowning” as a first listen, first album to get. AOD is a centerpiece time-wise and I feel a great intro album. It’s hard for anyone to pick a favorite from that album.

This is exactly the same way I found AFI! I always scored highest and had the most fun when this song came out. Oldish school game systems and music. I miss those days.
And now I have the 20th anniversary on picture disc. I’m a happy boy.

We should revive old topics. Things have been getting slightly stale and slow.
:>Charlie.

“Girl’s Not Grey”. I saw the video on MTV. I know that some people were mad at them for signing to a major and whatnot at the time, but hey, I might not have heard of them if I hadn’t seen that video on TV, so I’m kinda glad they got a bit of mainstream attention in the early 00s. “Sing the Sorrow” opened the door to more underground music for me (like punk & hardcore) so uh…yeah.

When I was 14 (sooo… 2001?) my first ever boyfriend mailed me a mix CD and a bracelet he’d made, and one of the tracks on it was “Wester” and I just thought it was the most romantic thing anyone could ever send anyone else. I still LOVE that track. Bought AOD shortly after

Days of the Phoenix on an episode of Daria! I was around 8.

Wayyyy back in 2003 or early 2004 my brother downloaded a bunch of songs off of Limewire when it was still a thing and I remember burning a bunch of the ones I liked onto a CD to listen to. I don’t remember which song I listened to first but I do remember that the AFI songs that made it onto the CD were; The Boy Who Destroyed the World, Morningstar, and Silver and Cold. I should have known it would lead to something more because I wound up listening to those 3 songs the most.

The first song I most likey listened to first is The Boy Who Destroyed The World, as I was a fan of the Tony Hawk games when I was a teenager, however I have no memories of actually listening to it.

My first memory of listening to AFI was when I saw the GNG video on the Mexican version of MTV, it was when they were in the blue alley painted in black, I changed the channel, then a few days later caught it again, and all is history XD

First song for me was ”Love is a many splendored thing” on a 7 inch with various artists that i picked up in a local record store in Sweden where im from. Later that same year (1995) i moved to Oakland and got to see them live a bunch of times at Gilman and a place in S.F. called Trocadero. I still got concert posters, 7 inches, a few photos of the band which i took, and even a AFI t-shirt with Robert De Niro from those times. Im glad i discovered that first 7 inch cos i never stopped listening to them, and even though it took me a while to adjust to their newer stuff im in for it all these days.

Awesome!! I’d love to see some of those pictures if you have a way to post them 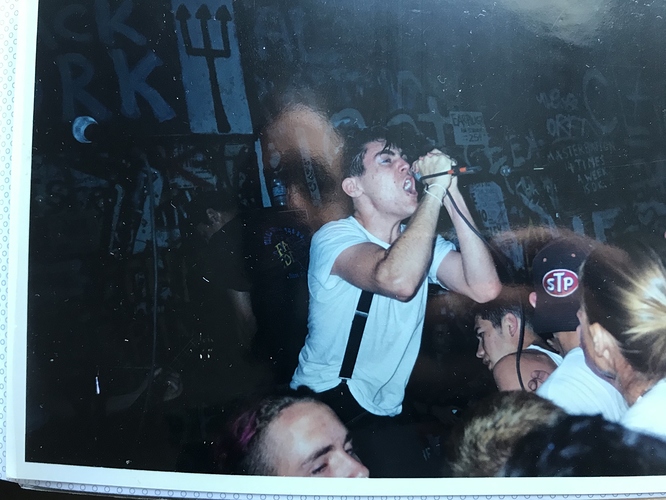 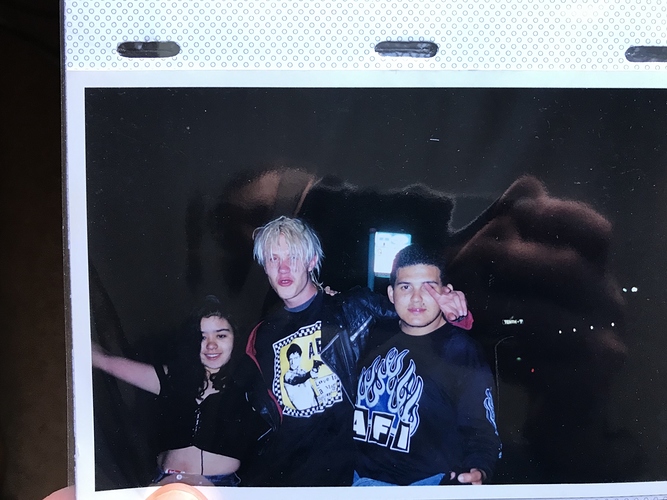 And this one was taken right after the show… I guess by some random passerby since Im in the picture.

This is awesome!!! So much energy in one picture. Thank you for sharing

Well, yes, I have a few more from the same show, but the one of Davey that I posted is the best.

Girls Not Grey. I’ve always been into east coast street punk, nothing on the west coast ever really caught my attention. I was grounded, and my parents took all my stuff, and I was stuck watching MTV2-total drag if you hate pop music. Anyway, the video for GNG came on, and it was over. I immediately bought Sing The Sorrow (stole the $ from my mom’s purse, sorry Mom), and everything they had out shortly after. I’ve been a die-hard fan ever since

I was 13 in 2003, but Sing the Sorrow isnt the first AFI album I heard. I was involved in an MSN chat group back in the day and there was this dickhead that loved pre-STS AFI. I did not like this person but for reasons of teenage wisdom, one of the first songs I remember hearing was Today’s Lesson off SYM, and I wasnt really impressed (so my first memory of an AFI song was a cover lol).
But my friend who had also listened to AFI by way of said dickhead had been converted. So I kept trying. Eventually I figured out how to convert their screaming into music in my brain when I heard “The Last Kiss” off BSitS with careful reading of the lyric booklet while listening to the song and fell in love.
The moment I played STS all bets were off.