This image was from Warped Tour '01. Davey is on the stage as a special guest of another band. I do not recall what band it was, but I heard them welcome “Davey Havok” so I ran over and took this photo.

The following photos are of AFI. They had switched clothes with Me First and the Gimmie Gimmie’s, apparently over a lost bet. Davey entered the stage with a Hawaiian hat on that he would quickly toss into the crowd. 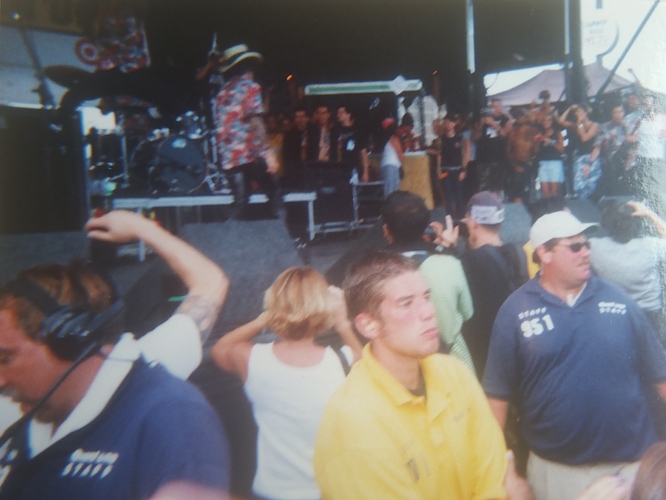 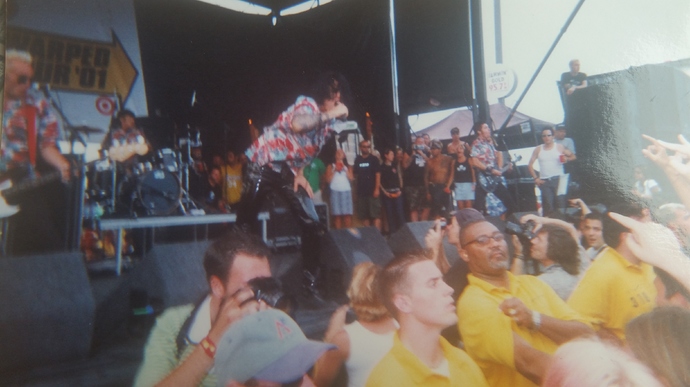 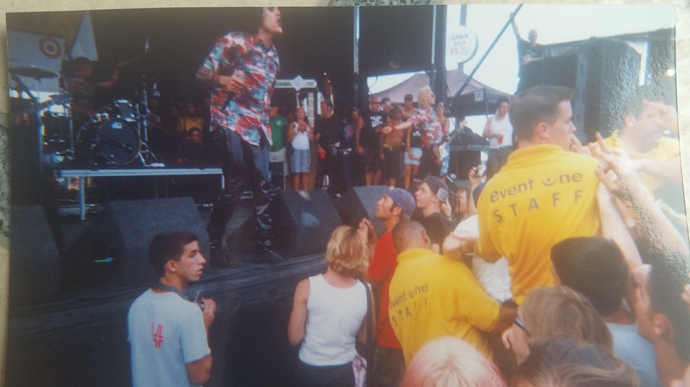 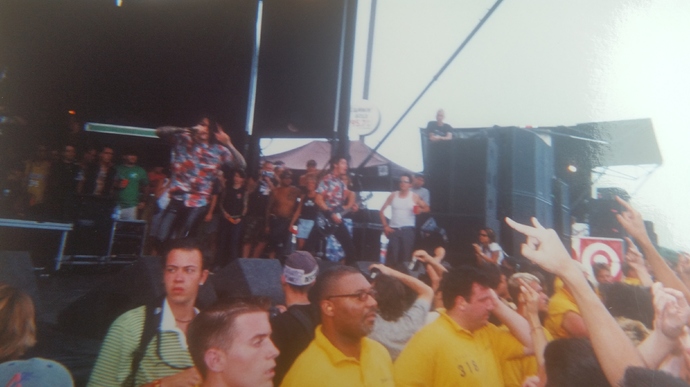 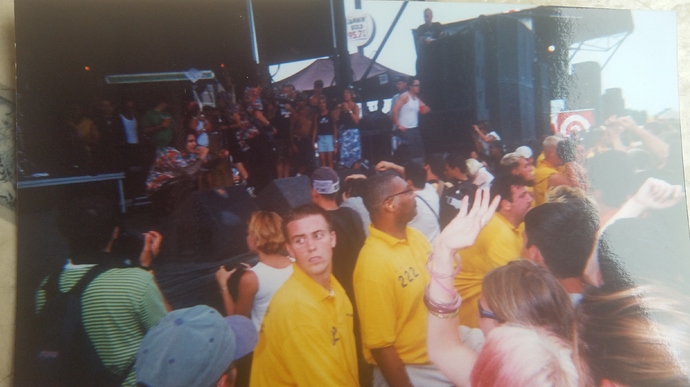 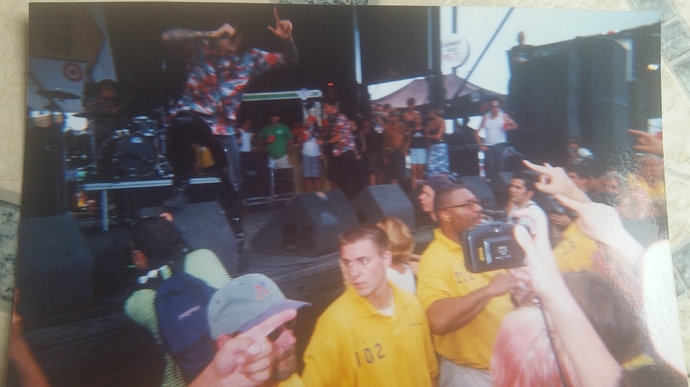 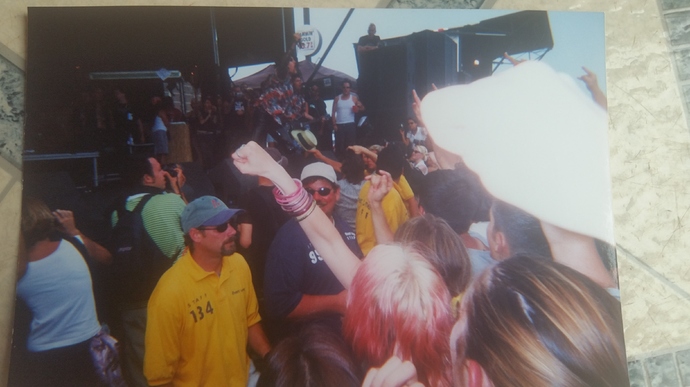 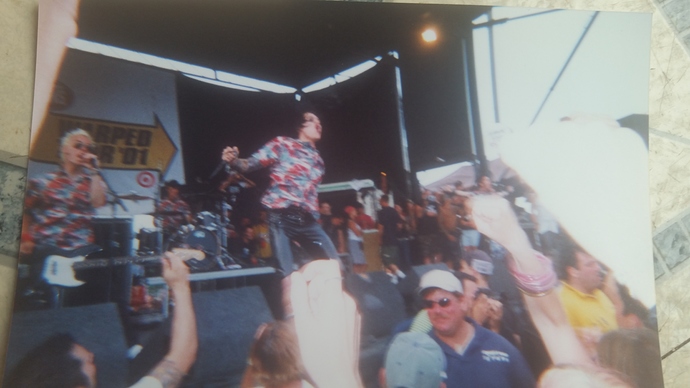 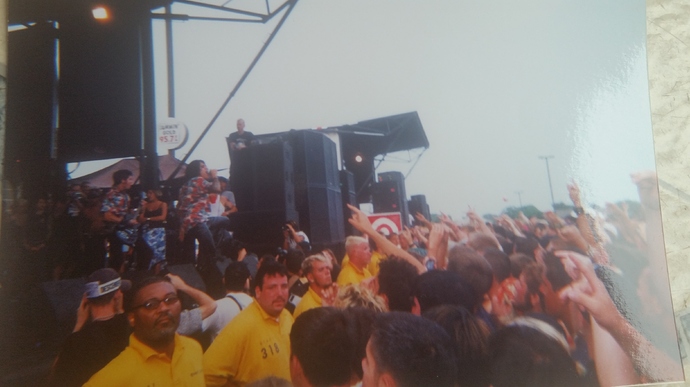 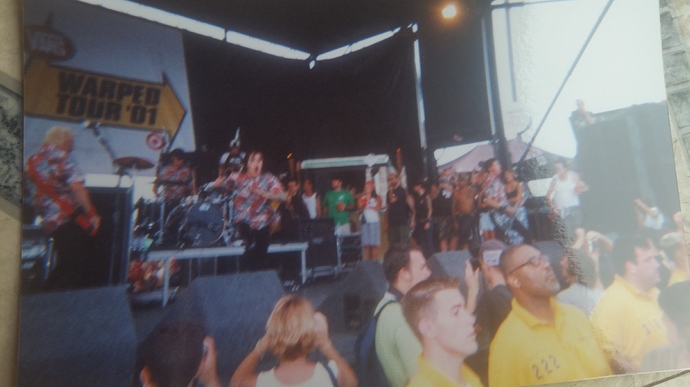 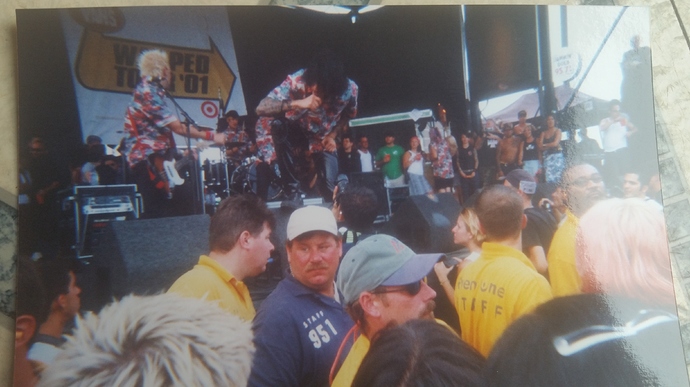 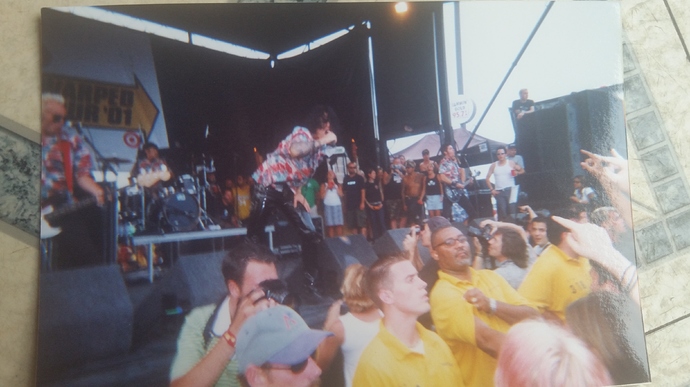 @_tonibell you better post your Warper photos of this show! lol - Was this your first time seeing AFI too?

Yep! This was my first time seeing them at the wee age of 11. I was 4’9" and 75lbs of pure excitement that day. I was totally crushed in here, but it was all good. I got to see the amazing AFI in Hawaiian garb.

And as soon as I am back from PA, I will dig through my closet for those photos. They survived the flood because they were in an air tight photo box.

Yes, please do! I could have sworn I had a photo of Davey taking the Hawaiian hat off… but I’m not seeing it.

I’ll be very happy if I do find it. I’m already anxious to see your photos.

I can’t even remember what photos I did get that day. I lost my STS era photos. My Decemberunderground ones are around somewhere. And then everything after that is on my computer.

My first time seeing them was at the Tabernacle in Atl, I think in October '09? I probably started listening to them around '00, so I waited some time before seeing them. I regretted that so much once I saw them. It was while they were still opening with Torch Song, which was really amazing. I remember they played Wester, which was one of my bsolute favorites at the time.the give and take between the audience and the band is better than probably any other band I’ve seen live.

Ah, so THAT’S the origin of the Hawaiian shirt photo!

Anyway, my first time seeing them was during the STS tour at this show: https://www.setlist.fm/setlist/afi/2003/avalon-boston-ma-23d714ab.html

It was at what used to be the Avalon in Boston (now the House of Blues), and I went with my then-girlfriend. We were on the barricade, and they were playing with Recover and The Explosion. My ex-girlfriend sort of liked Recover, but I didn’t. I thought The Explosion were a bit better, but I didn’t really dig them that much.

The wait between The Explosion and AFI was longish, and I distinctly remember a fan shouting out, “What, just 'cause you’re on MTV, now, you think you can make us wait?!” So annoying. When they finally took the stage, though, it was great. I remember thinking that Davey reminded me of Dee Snider in the 80s with his make-up, and I loved it. He did a glorious dive during “The Lost Souls,” and I remember really rocking out during “Dancing Through Sunday.”

Unfortunately, my ex-girlfriend got dehydrated and started to faint, so I had to literally drag her out of there during “God Called In Sick Today.” That sort of colored the experience for me, as that overwrote a lot of the rest of the show in my mind.

Please excuse the fact that this story with be flooded with excess sentiment, both regarding the band and not. I’ll try to be somewhat succinct and not stray too wildly.

My first time seeing the lovely source of our fandom was July 20, 2003 at Warped Tour in the parking lot of the then-Reliant Stadium in Houston, Texas. I consider this day to be, with no exaggeration, one of the most important and memorable days of my life so far. It was to be a whirlwind summer. I lived in South Carolina at the time, graduated high school in May, and had booked a trip to see my favorite band for the first time halfway across the country.

Why would I pick a 30-45 minute set on a traveling tour that would venture closer to my home? This would be the day that I met my ex-girlfriend in person for the first time and the actual beginning of a 6 year relationship that happens to be the only romantic relationship I’ve ever had. We met online through a chat room for a different fandom and became close. I eventually made a very out-of-character risk of choosing to fly to meet her. What better way to ensure at least something went right that weekend than to have it coincide with seeing AFI for the first time? We were supposed to meet the previous day but circumstances caused us to have our first meeting as a “jump in the van, we’re running late for Warped” hassle as she, her father, and 2 of her friends picked me up from a hotel. Honestly this may have made it easier for two shy introverts.

The day progressed in a wonderful way, seeing various bands, meeting The Used, etc. The excitement was palpable, almost frenzied, as the time for AFI’s set drew closer. Neither of us had much concert experience at the time. We weren’t exactly close to the stage, but had a great viewpoint from one side. As the first notes of Miseria Cantare rang out, I felt an exuberance previously unknown to me for the second time in one day. The throng of people came to life, seemingly moving as one. By the time Davey was belting “Nothing from nowhere I’m no one at all,” my feet were off the ground. I was being moved along with the crowd, not crowd surfing, but just as part of the mass, as “one of us.” I think I can point to that moment as when I knew going to concerts would be a huge part of my life, as I found something that I felt was meant to be a part of me. From Miseria Cantare to the crowdwalk of God Called in Sick Today, I was mesmerized.

I’ve seen AFI numerous times since that day and have had several incredibly personal positive experiences involving the band that are dear to me. This magical day was the beginning of a journey that continues to the present and hopefully for many years to come.

Hey! This is cool so I had to bring this back up. My first time seeing AFI was March 3rd 2007 at CSUSB, which is where I go to university now! Every time i walk by the area I’m like

The first time I saw AFI was in 2000 at the Ventura theatre. It was awesome. After the show, Hunter signed a sticker for me at the merch booth. I went home and put that sticker on my fender squire that I no longer own.

This was the first show I was at. At the time I never really appreciated how godlike the setlist would become

My first time was April 29th, 2006. It was at a local radio station’s fest, which was pretty small. They played in the middle of the day and the whole setup was weird, but hey I saw AFI! The setlist was great and I remember Davey introducing Kill Caustic off the upcoming album as it hadn’t been released yet. I have some shitty flip phone recording of him talking.

They had played Tucson right after STS came out and I wanted to go soooo bad. At that time I was a freshman and I hadn’t been to a show before. My mom was going to let me go but then my friend’s more conservative mom convinced her they were evil or some shit.

Oh man I am so jealous. That would be THE time and place I would choose were someone to invent a time machine. My favorite show.

I first saw AFI in March 1st, 2007 at UCDavis Freeborn Hall. I bought my tickets at the grocery store (they were a Ticketmaster vendor also). I was 14 and I wanted to get there early but my Dad said no and dropped me off an hour before doors opened, I hapoened to see some guys streaking but painted as Ninja Turtles. Despite being towards the back of the line I was able to get barricade and it was phenomenal. When they played File 13 & Ziggy Stardust I flipped. I was so excited, such a good show.
I’ve seen them 5 times now and every time is just as awesome as the first time!

My first AFI show was October of 2003 at The Paramount in Seattle. I had somehow convinced my parents that buying me tickets and taking my sisters (aged 15 and 13) along with one friend (aged 14) was a good idea. And that we didn’t need adult supervision. It was amazing. It was my first show in Seattle without parental supervision.

Yeah, it’s funny how years later… since their '01 performance in the Me First and the Gimmie Gimmies outfits, I realize that Hunter made a post on the official AFI site apologizing to their fans saying, “it wasn’t our idea”. lol.

Actually, it was around the time of the conception of the DF, believe it or not.