I thought you lovely people might appreciate these (the poster is in storage right now and the patch and button are otherwise occupied). 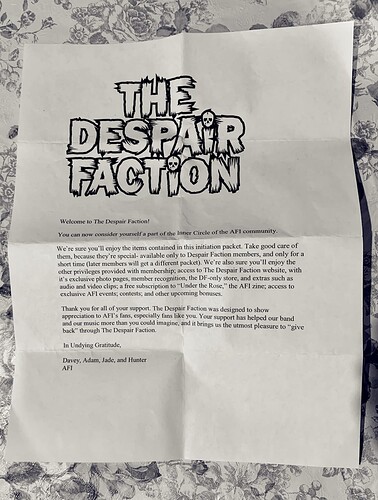 I have a lot of AFI related stuff I’ve let go of over the years, but never these, not DF things. There’s a fair bit more, too!

Honestly, I have too many AFI things…

Does anyone else still have anything precious to them from way back that they want to share?

(EDIT: pictured ticket is from the last time I saw AFI live - it’s longer ago than I like admitting, but my life has been a mess and it’s been impossible to get to shows.)

Ooooh nice! I’ve sadly got rid of most stuff over the years owing to moving house a hell of a lot, but I’ve always hung onto gig tickets. This one is my favourite. 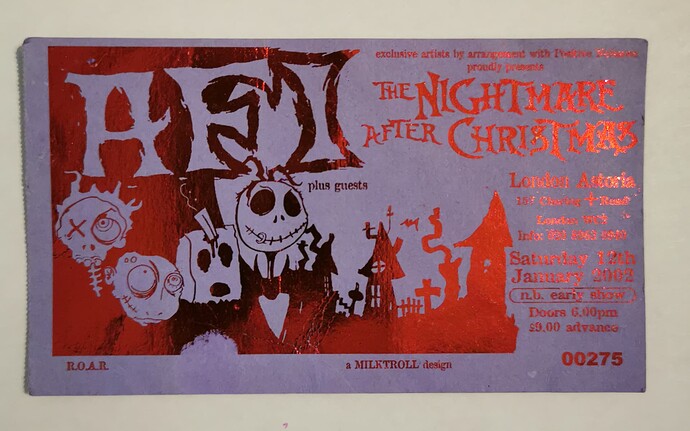 I don’t have enough AFI things. And I wouldn’t ever get rid of any of my AFI stuff.

What a fun thread! Yeah I’ve got way too many precious little treasures…
Here’s 4 little favs ~ original DF letter, signed Five Flowers show pass, a Jade pick and confetti picked out of my hair at following the AFI set at MTV Movie awards ~ some of the items in my box for extra special stuff 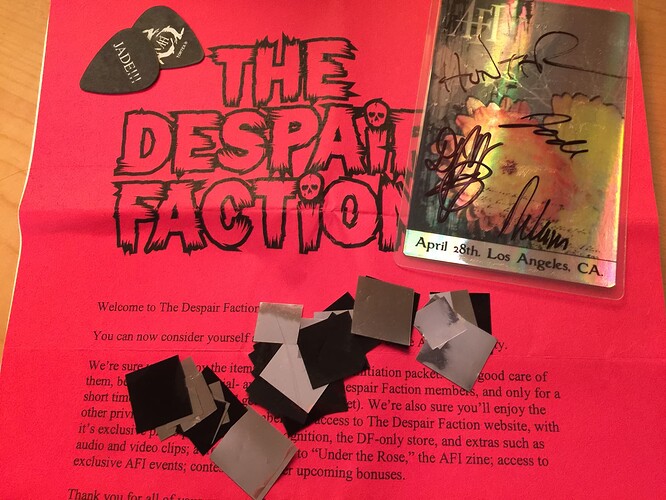 I still have almost all my gig tickets, too; the first show I went to they wouldn’t return the stubs and one seems to have mysteriously vanished.

I never thought I would either, but I had so many band tees a lot of them ended up totally threadbare!

A few less worn ones got donated with some of my other shirts when my sister and her friends were organising a clothing drive for disaster victims a while ago.

@janicethemenace That’s so cool you got to go to the Five Flowers show!

You also reminded me, I have one of Adam’s drumsticks somewhere! I’ll have to find it again.

I might have given or loaned it to my sister as inspiration when she was learning drums.

Oh Ally I’m a terrible magpie! Spouse threatened divorce if I bought one more black t-shirt!
I wish I had the time & drive to sort my AFI collection - so jealous of those with the beautifully laid out collections ~ rows and rows of nicely lined up vinyls

…and gig tixs by the hatful ~ whose got the time to sort, maybe when I retire? 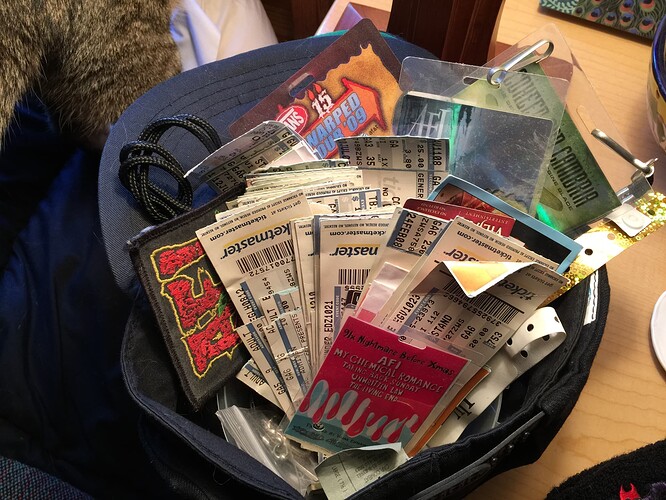 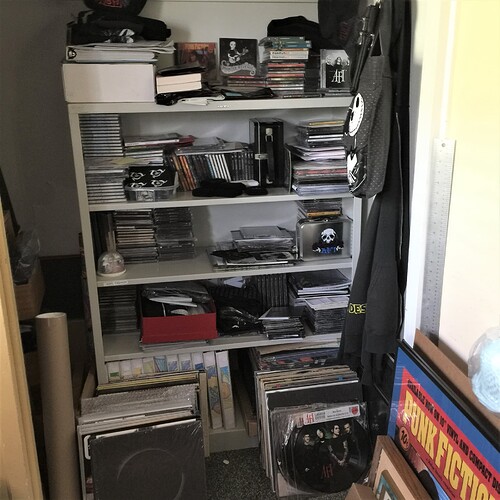 My vinyls are all packed up at the moment. I have a few signed CDs, but my stuff is all over the place right now. I did find these, though: 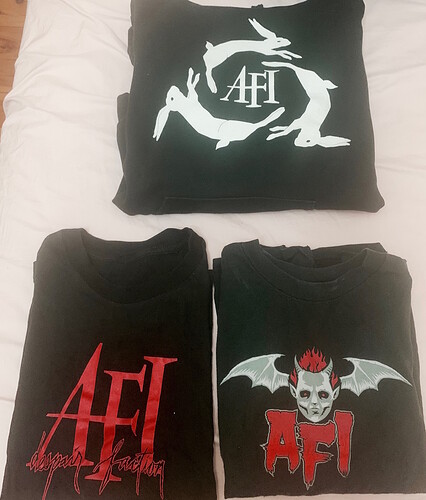 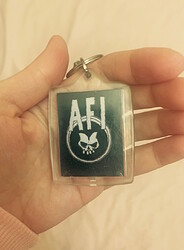 AFI_keyring21046×1417 164 KB
Hoodie and DF exclusive tshirt from the Decemberunderground tour, plus the original (1st Generation) DF tshirt - (an old friend was kind enough to just give me that one. 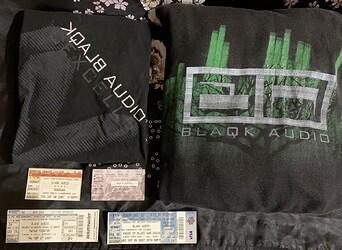 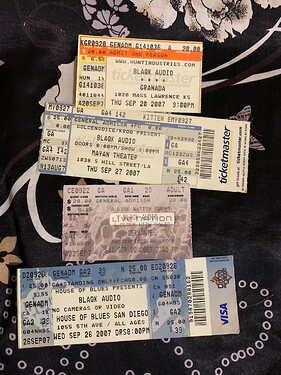 blaqkaudiotix21134×1512 232 KB
Original Tshirt and hoodie from first (2007) Blaqk Audio tour (I had a few more Blaqk Audio tickets, but I seem to have misplaced them.) 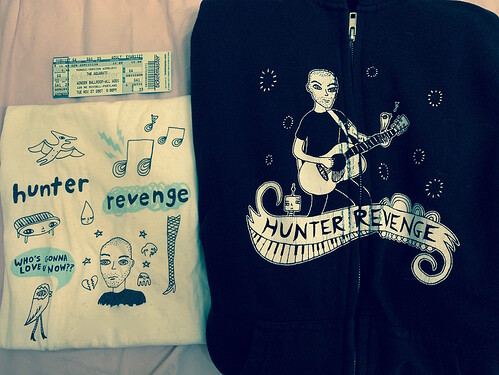 huntermerch21512×1134 448 KB
Shirt and hoodie from the Hunter Revenge tour, same year. I can only find one of these tickets, which says Aquabats, but that’s because Hunter was their support act!

Not fair! Hunter should have had his own show!

Damn, those were a good couple of years.

Nah, this is a nice thread, @Ally

You’ve probably seen this by now, but if not… this is probably the only place on the internet with a DF package archive:

@STORMS Thanks. I saw that thread, it’s really great! It made me miss the old DF so much. Everyone was so tight and the guys were really involved! Thanks again for creating these boards.

On a lighter note, here’s something good: I collected all of these when they were first released and the guys signed them all for me.

I used to have this on display, but it’s been in storage for a bit while I try to sort my stuff out. 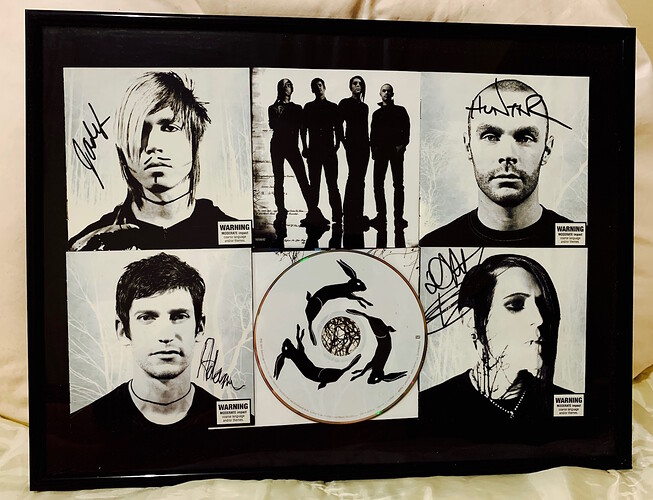 A question for you both ~ I’m sure this little guy had a name but I sure can’t remember it ~ do you guys have any idea? I loved that shirt! My son wore his til it was a rag - then did the same to mine 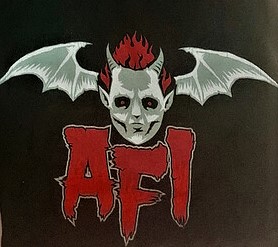 And Hunter’s my secret fav

Guess what shirt I had on! 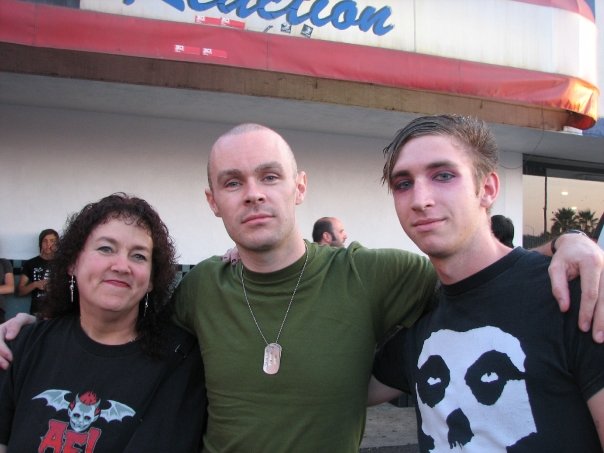 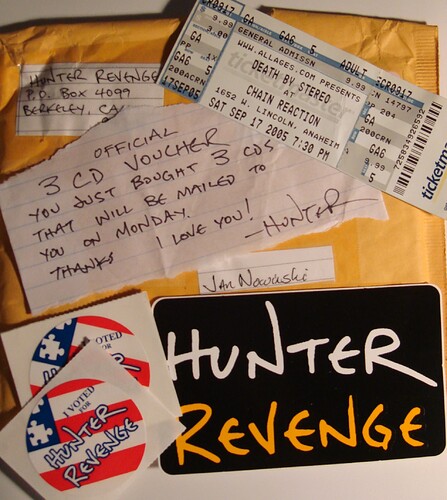 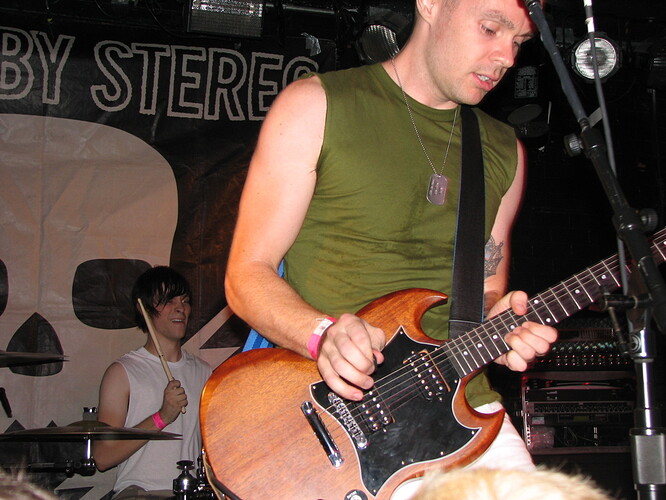 @janicethemenace Jade’s awesome - as well as the mustache and goatee, when he signed my copy of Art of Drowning, he wrote his signature on one of the headstones!

Was that character called something like Batboy? I’ve forgotten as well! I love that shirt, too. It’s so classic and so comfy!

That’s amazing we were both at those shows! Small world.

Oh, wow, the ‘I Voted For Hunter Revenge’ stickers! I still have those somewhere, too! I’ll have to try to find them again!

How neat of him to post you the merch after he’d run out. Hunter’s so cool.

Hunter is definitely a cut above the average ‘rock star’

Of all the many bands I’ve followed only two or three every did something as special as Hunter.
When they take the time to give an unsolicited call out it’s a sign a very special human ~ someone else had to alert me to this post as I don’t log in to Twitter much 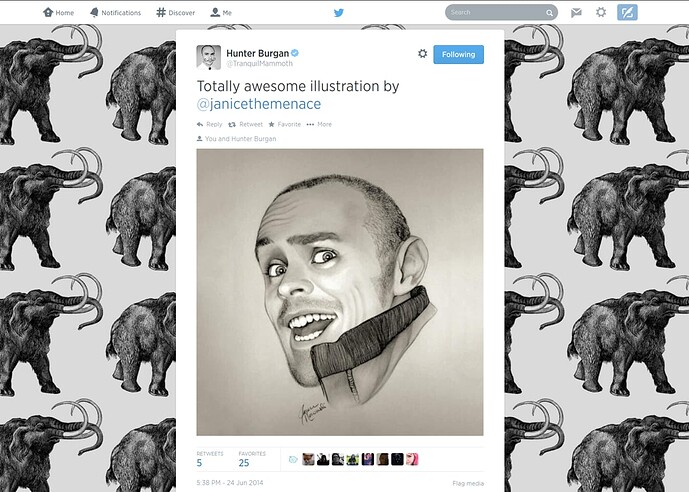 Hunter’s brilliant. That was a cool shout out - and I agree, your illustration is totally awesome!

They’re all special guys, they really go above and beyond for us.

It’s been a bit dead around here lately, so I thought I’d upload a picture of that signed Art Of Drowning vinyl I mentioned earlier in this thread. Can you see Jade’s signature? 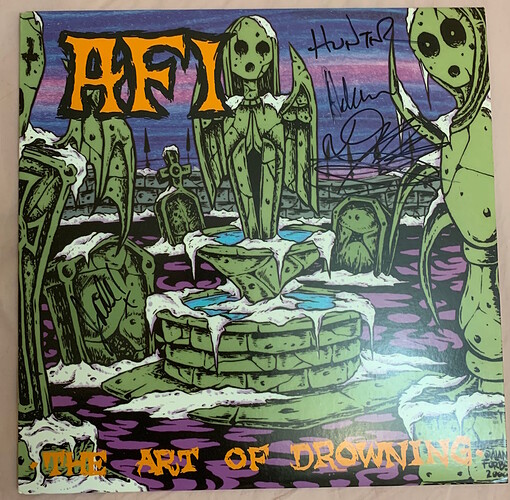 Also, not exactly something that precious, but who remembers this? The Unofficial Story of AFI: haha, buying it seemed like a good idea at the time. 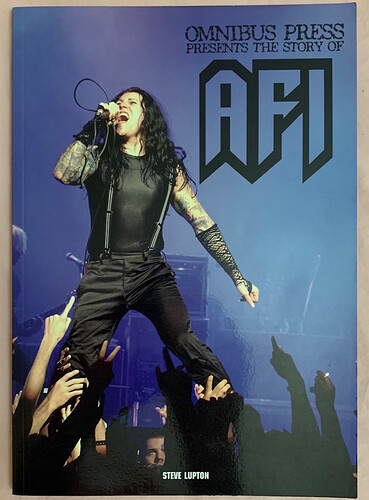 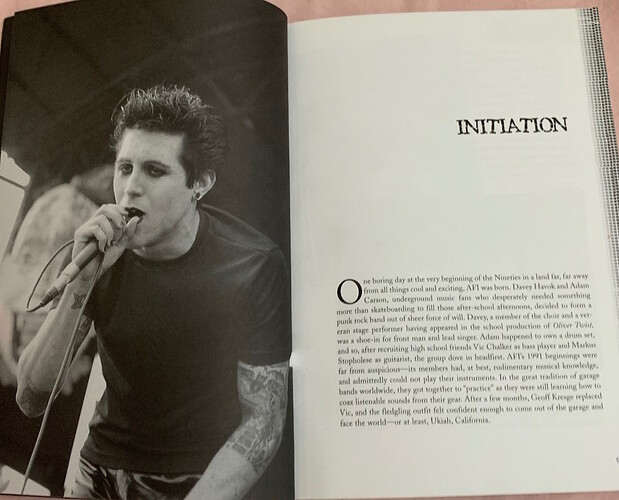 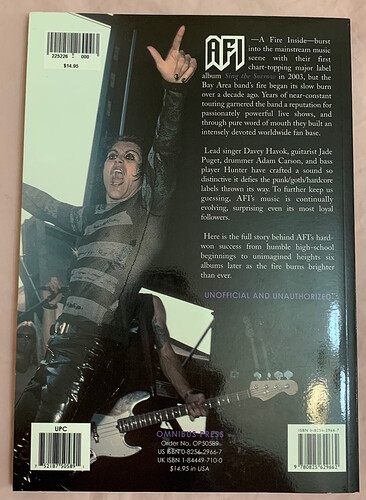 I had no idea there was an unofficial story of AFI, is it worth reading?

I had a quick leaf through it the other day, but didn’t read it properly. It has some good photos, though. I’ll have to read it through again properly and let you know. As far as I can remember it’s quite fun.