I just wanted to make a quick little post here (apologies if this isn’t allowed) to simply let everyone who may not be aware know that I started up a song survivor series on the AFI subreddit.

If you’re not familiar with what that means, allow me to quickly explain:

Every couple of days, I’ll be posting a new poll with a list of songs from a particular album (I’ll be going chronologically) and it’s your job to just simply vote for your LEAST favorite song from the list. With every new post, we cut out the song with the most votes, and we keep on going until only one song remains. I’m also using those same rules for one single (per game) album poll, where you vote for your least favorite AFI album and then every time we have a winner for each album, I’ll cut whichever album is in the lead at that time. 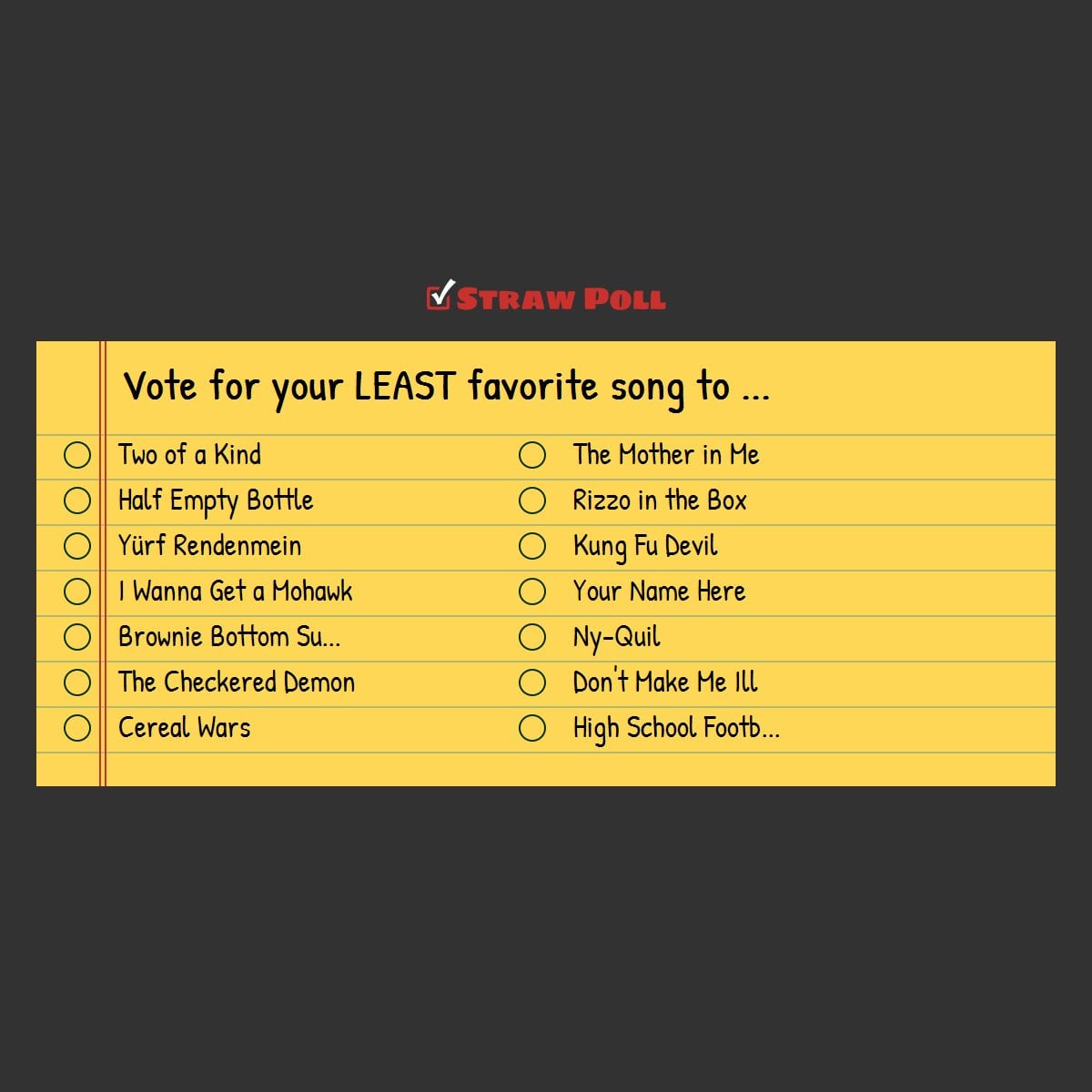 r/AFireInside - [SURVIVOR] Answer That and Stay Fashionable Round 2

We’re starting at the beginning, of course, with Answer That and Stay Fashionable. I’ll probably be wrapping up round 2 sometime tomorrow evening and starting round 3. As of right now, we’ve cut out Key Lime Pie, and it looks like Half Empty Bottle is in the lead for round 2 so that one’s likely going to be cut tomorrow. Answer That is currently in the lead for the album eliminations too.

You don’t need a Reddit account to participate, either! You can just drop by every couple days if you’d like and vote without logging into anything at all (although I’d love some discussion over there and I’m sure some others on the subreddit would as well!). Super quick and easy.

Again, sorry if this is breaking the rules in any way, and let me make it clear that this is just a fun little game, nothing more. But the more participants the better! I plan on doing every album, which means that this will be going on for quite a while.

Thanks for checking it out if you do, thanks for reading if you did, and I hope to talk to some of you soon!

Favorite Song from "The Art of Drowning"? AFI Everything

What is YOUR favorite track from the 2000 album, “The Art of Drowning”? Initiation Lost Souls The Nephilim Ever and a Day Sacrifice Theory Of Greetings and Goodbyes Smile A Story at Three Days of the Phoenix Catch a Hot One Wester 6 to 8 Despair Factor Morningstar Battled 0 voters Show results

Favorite Song off of BSITS? AFI Everything

I’m sure Reddit will have more responses to your polls though… we’re still growing.

In my personal opinion, I think “God Called in Sick Today” will reign supreme across all songs and albums.

I like the idea of everyone voting for their least favorite and slowly eliminating until only one is left. And I agree with @STORMS God Called in Sick Today will be hard to beat

Oh awesome, thanks for linking those, that’s cool that you’ve done it too! I’ve been a member here for a while but honestly haven’t been active enough to have seen that, so I appreciated seeing those too.

Truth be told, the AFI subreddit has a lot less activity than this one does. The main reason why I posted there rather than here is just because I’m typically more active on Reddit since it’s an app on my phone, although I hope to check back here more often since the positivity on these threads are always awesome every time I stop by.

God Called in Sick will almost definitely win the Black Sails survivor, I agree, and I plan on doing one more survivor with all of the previous winners so there’s a good chance that it’ll make it quite far too, if it doesn’t win.

Thanks for being so welcoming!

Thanks, glad you’re down with the idea! Hope you get the chance to drop in and vote from time to time and see what the winners are!

God Called in Sick Today will probably make it to the end of the Black Sails survivor, you’re right. Like I said to Storms too, I plan on doing an “all winners” survivor and I fully expect to see that one going very very far, maybe winning. We’ll see what happens!

@Midnightapalooza when viewing these forums on your phone you may be prompted to have the icon installed to your main screen, FYI.

This forum software is kind of like an app in that respect.