They’ll probably release more floor GA in each presale right? I doubt they’d sell out the entire floor in one go?

What’s the code?! I haven’t gotten an email 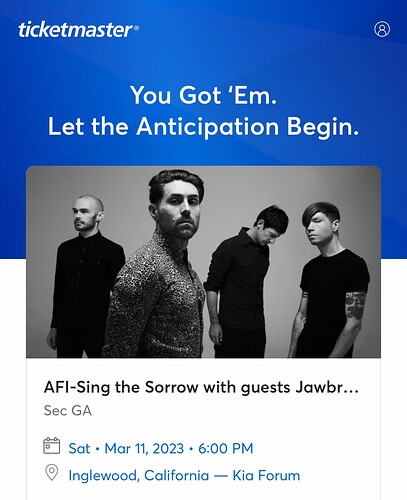 I can finally relax

Is GA sold out or are they not releasing it until the regular sale?

Floor is completely sold out.

My code was in my inbox too late, bummer

how did you get your code, mine hasn’t come in my email yet nor my spam folder

I never got an email. I don’t want GA tickets, i just want seats but there is nothing available except nosebleeds.

I still haven’t gotten my code too

LOL there is a “platinum” seat available for $600…what the hell?

Got floor for $69 with the code and now I see they’re going for $500 with the platinum pricing!!! Ticketmaster is a bunch of scammers!!

This is disappointing…I can’t believe I’m considering spending $300+ a ticket.

I never got an email, so I came online at 10AM only to see that basically everything for DF was sold out and then I have to battle the scalpers on Friday.

Floor might be somewhat tough to get at a reasonable price if you don’t hit it immediately after one of the presale/onsale times, but if you guys are just trying to get in the building, I’d say chill until the Friday onsale at least. Don’t pay some ridiculous inflated price. If you’re close enough to LA to make decisions closer to the day of the show, you might even consider waiting until that week to buy tickets. Sometimes that works out with big stuff like this that has high scalper interest initially.

It definitely sucks that ticketmaster is basically a goddamn auction site now.

Same, super sad it sold out so fast, and obviously by scalpers.

Same, I get emails very sporadically, also was there ever a new official despair faction site created? Happy to be here too

It’s sold out. Will they release more tickets for other pre sales?

Total disbelief, I was at work when I got the DF email at 11:30EST didn’t read it fully about the link, saying it was good for 9amPST where it’s 12pm here in NY. I was about 30mins late to presale when realized what happened and nothing was left except 200 level. Guess here’s to trying again tomorrow for GA